Deciding to go vegan is no small thing … especially when it comes to cheese! For many, the thought of giving up their cheese is a tough one. In fact, it’s been likened to quitting cigarettes and there’s actually a good reason for that, which we’ll come to later. But the most important question today, “is there any good vegan cheddar?”, must be answered…

Is There Any Good Vegan Cheddar?

Yes, there is some really good vegan cheddar on the market these days. Have a look at the Violife review below. To be clear, we’re talking about taste as opposed to nutrition. It’s a common mistake I see people making online to compare the nutritional profiles of vegan vs cow cheese. Taste wise, it’s getting pretty close to the real thing!

Why Do Vegans Not Eat Cheese? 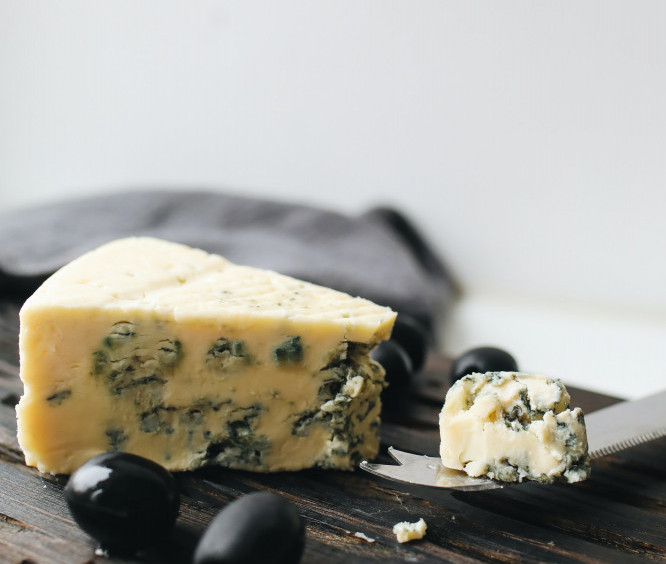 It seems inconceivable to consider preparing a pizza without that salty, fatty, cheesy delight. Surely it’s integral to the whole pizza-based experience 🙂 But consider it we must, if we want to live a vegan lifestyle. We must do more than consider … the cheese has got to go!

Related : Does Vegan Cheese Cause Constipation?

Most learned souls now agree the dairy industry is even more cruel to animals than the meat industry. Cows display many of the same maternal instincts as human mums and are fiercely protective of their calves.

The dairy industry relies on the calves not drinking their mother’s milk and so they are separated shortly after birth. This is hugely distressing for the cow and calf and we humans perpetrate this insane torture on these beautiful, sentient beings on a truly industrial scale. 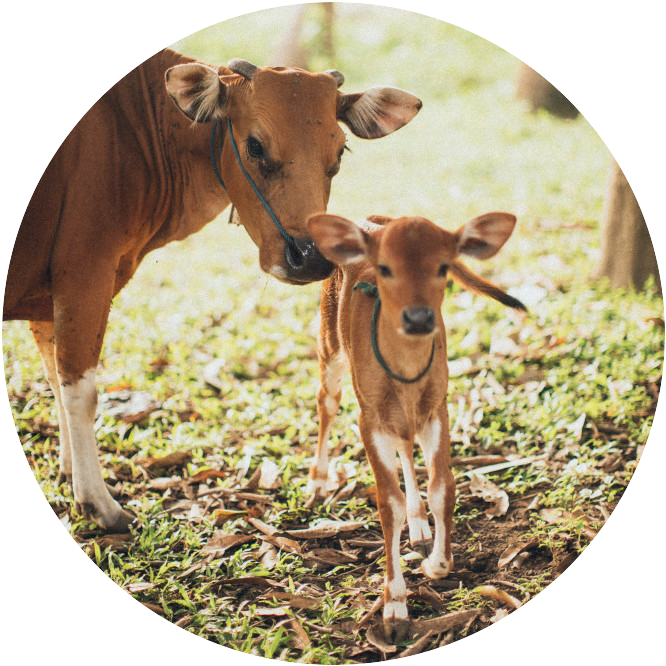 For the male calves it’s even worse. They are no use to the dairy industry and often it’s more economical to slaughter them at birth rather than ‘process’ them in other ways. If they’re lucky, they’ll end up in the veal industry which is itself obscene! In fact, maybe it’s better luck to be shot dead at birth.

So whenever I feel like my guard is down and I’m tempted to buy dairy cheese (which admittedly is very rare these days) I just think of the cows and the extreme cruelty they face day after day in the dairy industry … just to satisfy our insatiable craving for cheese!

So why do we like cheese so much anyway? Why does it feel like giving up is going to be an impossible mountain to scale?

Cheese is Addictive – Just a Little Bit Like Morphine! 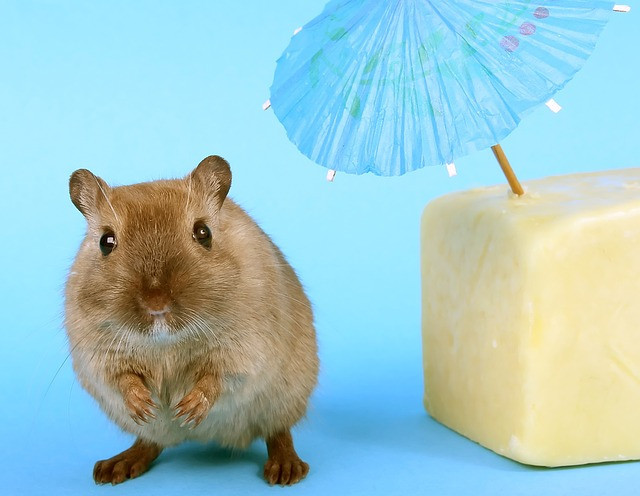 Yes it’s true! Above I mentioned how quitting cheese can feel as difficult as giving up cigarettes. Well that’s partly because it is actually mildly addictive. There is a protein in cheese called casein which is the most abundant protein in cow’s milk. During the cheese making process this casein is concentrated further.

Casein is broken down during digestion in the human gut producing compounds known as casomorphins and it is these compounds which trigger the same opioid-like response in the brain as morphine [1].

It has the end result of acting on the pleasure centres in your brain triggering a release of dopamine. Yep, when you eat cheese you are literally ‘doped up’ and this reward keeps you coming back for more!

So this might go some way to explain why it feels so difficult to give up the cheese!

But y’know, it’s funny, when you do give it up you wonder what you were worried about. After a week you’ve almost forgotten about it! At least, that’s how it was for me!

But for those who cannot do without their cheddar … never fear, alt cheese is here!

In a few short years dairy free cheese brands have multiplied exponentially and now all the major supermarkets seem to be offering their own versions on the theme!

From cheddar to cream cheese to halloumi it seems there is no end to our creative talents when coming up with products that mimic dairy cheese! I’ve yet to see a dairy free brie though!

Here’s some of the best tasting brands my family have tried: 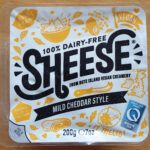 Sheeze Mild Cheddar Style Block
This is my new favourite dairy free cheese, just because it’s deliciously crumbly. From those clever people at the Bute Island Vegan Creamery, Sheeze is one of the first ever brands to enter the dairy free cheese market, created in 1988 would you believe! They’ve come a long way since those early beginnings and have honed the art of producing amazingly realistic vegan cheese. This award-winning offering is a creamy, crumbly delight with a mellow mouthfeel and mild cheddary taste, it’s wonderful in cheese and pickle sarnies. It has a subtle aftertaste and doesn’t stick to the roof of your mouth. It is a little bit pricey but then so is cow cheese! I highly recommend you give this one a whirl. 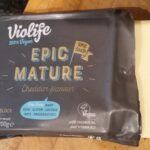 Violife Epic Mature Cheddar Flavour Block
Only just pipped to the post by the Sheese mild cheddar, this was our default go-to for that cheddary hit for years! Great in cheese and tomato croissants, perfect for pizza and pasta. It’s one of the closest products to real cheese I’ve found so far. It tastes great, has a texture similar to cheddar (although more rubbery) and doesn’t stick to the top of your mouth when melted, like some other alt cheese I’ve tried. With 96% plus positive reviews online it seems I’m not alone in recommending this one. A word of warning though … if you’re coming from being a full-on dairy cheese fan then there is no vegan option I’ve found which realistically mimics real cheese … and I used to devour the stuff like it was going out of fashion! Don’t want to get your hopes up! 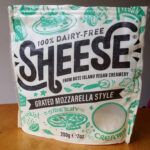 Sheese Dairy Free Grated Mozzarella Style
Hailing from the Bute Island Vegan Creamery in bonnie Scotland, this offering from long-time vegan cheese producers, Bute Island Foods, is another really good attempt at mimicking a mozzarella cheese. With a slightly tangy taste and an authentic, creamy mouth feel this delicious grated Sheese is a winner on top of your pizza or lasagna. In fact, it’s the vegan cheese of choice for many pizzerias across this green and pleasant land 🙂 Again, if you’re planning to pit this product against a real Italian mozzarella then you’ll be disappointed. Vegans know that dairy free cheese does not match the real thing, especially for texture but products like this do a very good job at providing us with a real cruelty-free alternative! Thanks, Bute Island 🙂

Applewood Vegan Smoky Cheese Alternative
Here’s another one to try and one of my favourites. Designed to melt well, this is particularly good in a cheese and red onion toasted sandwich! With an addictive smoky flavour and a thin layer of BBQ style coating on one side … mmmm I’m feeling hungry! A quick perusal of the interweb reveals mostly positive experiences with the Applewood vegan cheeses but interestingly, the negative reviews are really negative with references to ‘sweaty foot odour’ seeming common! But real dairy cheese is usually a bit of a ‘sweaty foot’ experience anyway, isn’t it? Regardless, I love the stuff … the only thing I’d say is it does stick to the roof of the mouth a bit when melted but I can live with that! Why don’t you give it a go and let me know, below! 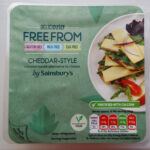 Sainsbury’s Deliciously Free From Range
You know veganism is hitting the mainstream when all the supermarkets have cottoned on and are offering up their own dairy free cheeses. The choice is now staggering! For a nice bog-standard cheddar type cheese which is yummy on crackers with a bit of chutney, the Sainsbury’s cheddar style block is a great choice. I particularly like this one because the texture is quite crumbly, like a ‘nice’ mature cheddar. It has a good tangy, cheesy taste too! For the supermarket offerings you could do a lot worse than this and it’s priced very competitively as well. Give it a whirl and let me know what you think! 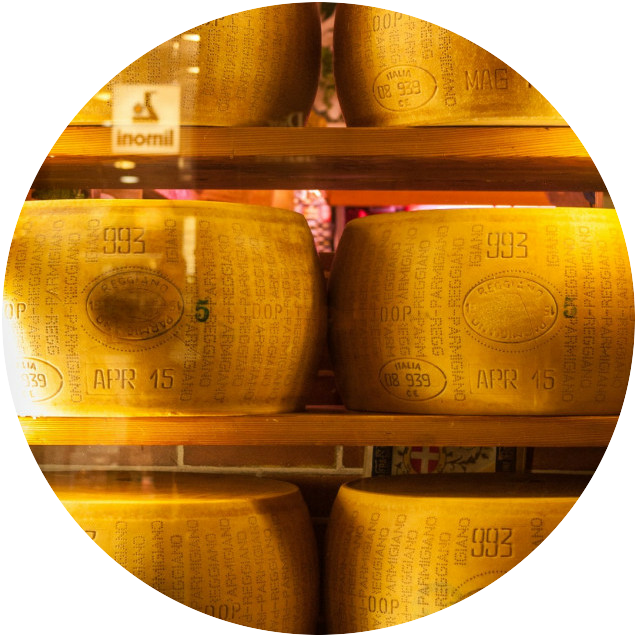 As indicated in the reviews above, coming up with a realistic vegan cheese is a very difficult thing to be tasked with and most non-vegans scoff at our pathetic attempts to produce such a product! It all comes back to doing what we can. Doing the best we can with what we have to work with.

Dairy free cheese is always going to be a disappointment for hard core cheese aficionados but that’s not the sort of person this is aimed at. Vegans know lifestyle sacrifices are necessary in order to live a life which is more compassionate.

One of those sacrifices is cheese … and I speak as someone who loved his dairy. If I can give it up, you can too! But you will need an open mind and be aware that even the best dairy free cheese products are not really anything like real cheese.

It’s Getting Cheesier Every Day! 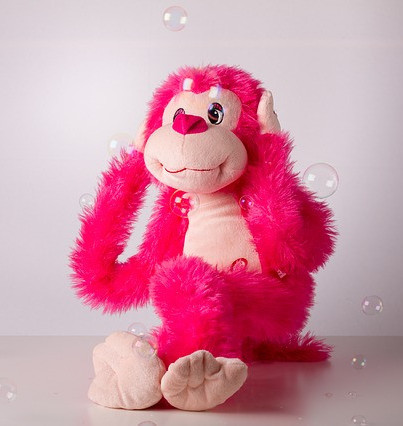 In the ‘before-times’ when veganism was considered some kind of wacky cult, the idea that you’d be able to buy dairy free cheese online in a few short decades was utter (cheese and potato) pie in the sky 🙂

But here we are in the modern day and the dazzling array of vegan-friendly dairy free food products is impressive. Most of these alternative cheeses are great for everyday replacement in cooking or in a sandwich with some salad for lunch.

Take no notice of the naysayers who whinge about it being nothing like real cheese … yes, we know!

But it’s the best we have and it’s perfectly fine for whacking a handful on your Friday night pizza if you really miss that cheesy flavour, but have made the decision to spend your hard-earned cash on products that do not contribute to the unnecessary harming of animals!

I hope this article has been informative and possibly even a little bit entertaining! I’d love you to get involved and post your own notes about your favourite dairy free cheese. Just leave a comment in the space below and I’ll do my best to get it approved asap! Also, please do share this with your friends and they can leave their reviews too … we’ll all help each other 🙂